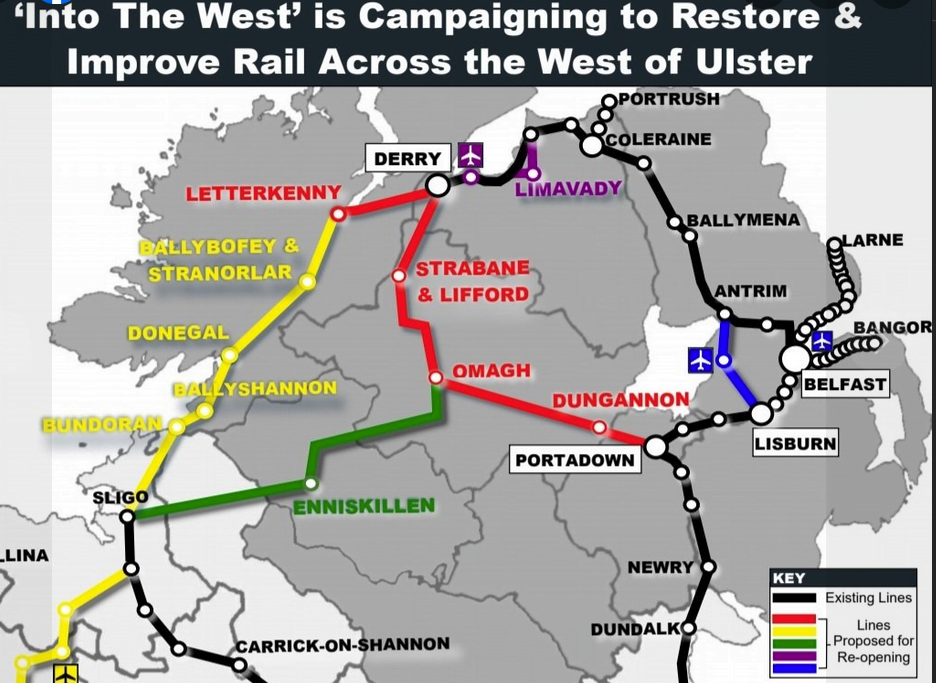 A rail connection would be transformative for tourism and connectivity in the Southwest. If coupled to a broad process of electrification it would reduce the environmental pollution associated with privatised transport and encourage remote working and a renaissance of rural communities here.
It would change the economics of this part of Northern Ireland and facilitate the sort of public investment in publicly-owned industry needed to reinvigorate our economy and create decent jobs.

Anyone who has been active in campaigning around any public service will know that a standard tactic by the powers-that-be is to run sham consultations usually which pretend to listen but which really push a long-predetermined agenda.

The all-Ireland rail consultation is not really in that format but after having gone through it in some detail I believe that it too is (unfortunately) likely to be just such an exercise.

In this case, I suspect it has more to do with Ministers either side of the border being seen to encourage the public demand for better (or any!) rail services. In the north, SDLP Infrastructure Minister Nichola Mallon can position herself as willing to invest but being denied that investment by the Sinn Féin Finance Minister. In the South, Green Party Minister Eamon Ryan gets to burnish his party’s all-Ireland credentials and perhaps instigate a decades long plan to do what is needed today!

Politicians will be politicians however but what is perhaps more disagreeable is that the consultation appears designed to encourage campaigns in different areas to mobilise supporters to outnumber the opposition. To play off communities on the basis of austerity.

There is nothing in this consultation of substance. No plans that you would expect from a consultation that is genuinely considering the sort of massive investment needed to fill the gaps or improve the speed or frequency of services. It’s all geared up to encourage responses and to clock up demand. While I encourage people to respond, I do so saying that people should be aware we are likely getting played off each other.

Recently I had occasion to speak to what I call an expert on rail transport in Northern Ireland . Suffice to say he is a rail service driver and he was scathing of the lack of ambition in what passes for management in NI.

He pointed out a few known facts. Such as the reality that rail services are far too slow to really attract a transition from the car, that the rolling stock need replaced, that investment today is never future proofed with the possibility of ambition for tomorrow.

Slower than a bicycle

One example bears testimony to the short-sighted approach taken by Translink bosses. The current Belfast to Derry/L’Derry route is single track – leading to a situation where the train service between the big two cities of NI was famously beaten by a cyclist in 2018. To speed it up the track would need to be dualled along its length.

Along the route there’s a bridge which had to be replaced – but it was only replaced with a bridge capable of accommodating the weight of a single train. The cost of building the more sturdy bridge was small – but to make it stronger now would force it to be rebuilt afresh costing even more.

Another issue was that the new track was actually run down the middle of the old dual track lines so that if at some stage in the future it was to be upgraded the entire track would have to be lifted to fit two lines in. Again the cost of this was insignificant but the cost of reversing it in the future would be huge.

The driver said that even the lighting on the train tracks shows the lack of ambition. To save money on lighting, the stretches of dual track (needed to allow trains to pass) are much further apart than they should be – this means there is an even greater limit on rail speeds.
It is hard to reconcile such chronic short-sightedness (driven by Stormont budget cuts) with the ambition of the new consultation paper. The only way things in Stormont are going to change is if we see a genuine political opposition arise that stands against both sectarian and neoliberal politics.